What Can Crowdfunding Do for Your New Business

No business is free. Startup costs are the number one reason that more people don’t own a business. You’ll have to think about location, product, employees, licensing and more. When adding these expenses together you could be looking at tens or even hundreds of thousands of dollars needed to invest in your dream.

Selling a Business? ExitAdviser is a guided platform to fast-tracking your business sale.


In the past decade, the world has been riding a financial rollercoaster with the vast majority of consumers at the whim of any ups and downs that may come. Enormous amounts of consumers around the world lost their jobs and eventually homes as the economy collapsed and struggled to get back to its feet. People were going to sites like Settlements.org to sell settlements they never thought they’d have to. Because of that, we’ve recently seen a rise in entrepreneurship. The simple fact is, more people feel comfortable working for themselves than ever before. The psychological impact of mass job loss has lead people to an “I need to do it myself” mindset.

It’s actually exactly what it sounds like. Crowdfunding happens any time a crowd of individuals puts money together to fund a start-up or make a donation. This can happen in a four different ways. So, let’s take a look at those first. 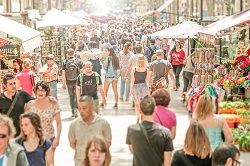 The process of reward based crowdfunding is simple. Instead of making donations, people ban together to provide funding in exchange for some sort of reward. The reward could be anything, but in most cases, it is either the product or service that the company being funded provides. As with donation based crowdfunding, the company funded is not in debt to those who funded it.

Equity based crowdfunding can also be considered investment based crowdfunding. That’s because those who form the crowd that’s doing the funding are making a real investment. They aren’t just making donations; they will actually own equity in the business or businesses they fund. That means that the crowd participants will also be able to enjoy profits as the company grows. It’s a-lot like selling shares that aren’t listed on the market.

Debt crowdfunding is the final type you’ll find. When it comes to debt crowdfunding, the crowd isn’t making a donation, nor will they be given shares in the company that they are funding. Instead a legally binding agreement is made showing that the funded company will be indebted to the crowd. The agreement will generally include an incremental payment plan with a predetermined period of time between each payment, just like any other debt. Also just like any other debt, the funded company will be required to pay interest to the crowd. The interest rate will be a predetermined rate included in the agreement.

As with any other business funding option, crowdfunding comes with its own set of pros and cons. By taking a look at what you like and don’t, the decision to go with crowdfunding or not will be much easier on you.

Less Time Fundraising – Because starting a business does take money, most business owners who have a rags to riches story did something to raise money. Chances are that something took quite a bit of time. However, crowdfunding takes away the headache of trying to find time to do the fundraising you need to get done. This opens more time for you as an entrepreneur to work on building a stronger business.

Because Not Much Needs to Be Invested, More Investors Take Part – As an investor, or donor, you may be willing to part with as little as $15, but not with $150. When it comes to crowdfunding, the amount you decide to donate or fund is completely up to you. Because of this, crowdfunding has become a hotbed for investors that are interested in being part of a crowd that supports a startup business or two. More investors will make it easier for you as a new business owner to get the money you need.

Less Skin in the Game Often Equates to Less Drive – Drive is what it’s going to take to get your business profitable and keep it there. If you have to spend a couple of years fundraising, and invest your own dollars into your dream, chances are, you’ll have more drive when it comes to making that dream a reality. Even in business, the spoiled kid concept has its place. If you do choose to use crowdfunding, don’t be OK with living off of investments; make sure you maintain the drive to run your business.

Less Regulation Means More Fraud – When you take part in crowdfunding as an investor, you have to trust that the story you’ve been told is true. There’s very little when it comes to regulation, cross referencing stories, and other measures that would protect you from fraud. For instance, I could put a page one of the donation based crowdfunding sites that says I need a kidney. I don’t, but I’m sure someone would donate to help. With that being said, before investing, make sure the t’s are crossed and the i’s are dotted in the story.

Getting a business going can seem to be the most daunting task you take on. However, it can also be one of the most rewarding. If you’re having a hard time figuring out where you’re going to come up with the startup money, don’t stress, there are tons of ways. Just relax and try and find one that works for you. Who knows, crowd funding could be it!

<< Back to Collection of How-to Guides